The trend in architecture and facility management is towards »smart« buildings which, by means of integrated flexible electronics, automatically react on changing ambient conditions. These buildings are energy efficient and may have a number of comfortable features like solar cell modules integrated into façades or electrochromic windows, which change tint from clear to dark in strong sunshine. The implementation of novel usage concepts, however, still faces several challenges, mostly concerning the required service life of electronic components and their direct integration into building envelopes, especially when these are of lightweight construction or comprise flexible membrane roofing systems or façades.

The »flex 25« project team made key progress in the integration of electronic components in flexible, film-based building envelope areas. A prominent example for the targeted type of building envelope is the façade of the Munich Allianz-Arena which is constructed of fluoropolymer films. The researchers successfully applied cost-efficient coating procedures on fluoropolymer films. A roll-to-roll process was used functionalize the films with a multi-layer-coating to protect integrated electronic components from water vapour and UV light. Furthermore, a long-term stable antireflective coating was successfully applied to the weather side surface. Roll-to-roll processing keeps production costs low and enables the functionalization of large-area membrane elements of practically unlimited length.

Flexible electronic solutions are trendy in nearly all areas of everyday life: fitness trackers that come as bracelets with bendable displays or flexible solar cells working as smart phone battery chargers.
The »flex 25« project had the main goal to transfer existing vacuum and controlled atmosphere coating processes to weatherproof film substrates to add ultra-barrier properties against water vapour and oxygen while at the same time maintaining a high optical transmission after coating. The resulting surface-functionalized plastic film had to be suitable for the encapsulation of flexible electronic components. The integration of such active components over large areas allows creative building scenarios – for instance functionalized flexible membrane roofings over arenas or event halls – and enables the retrofitting of existing building façades or rooftops of industry plants with solar cells. Large area façades and membrane roofings are usually not suitable to carry the weight of conventional glass encapsulated solar panels, but film based solar cells are 40 times lighter and allow an integration into membrane roofs.

The »flex 25« researchers at the Fraunhofer Institutes FEP, ISC and IVV have developed an economically viable and technologically beneficial alternative to glass encapsulation. It is based on the ultra-barrier concept of »POLO®-High Barrier« which was adapted to work for the coating of weatherproof fluoropolymer films like ETFE. Now, the concept is ready for a pilot-scale production of functional films with ultra-barrier properties against water vapour and oxygen which are suitable for e.g. the encapsulation of organic opto-electronic components such as organic light-emitting diodes (OLEDs) or flexible solar cells.

The functional film is based on a multiple layer concept which includes specific hybrid polymers (ORMOCER®s) and at least one metal oxide layer (illustrated below). ORMOCER®s are a class of material developed by the Fraunhofer Institute for Silicate Research ISC. ORMOCER® lacquers are suitable for wet chemical roll-to-roll coating processes. ORMOCER® coatings smooth rough film surfaces and cover surface and coating defects. They have good gas barrier properties and they protect underlying layers and encapsulated components against degradation from UV radiation when provided with integrated UV absorbers.

The metal oxide layers were applied at the Fraunhofer Institute for Organic Electronics, Electron Beam and Plasma Technology FEP. In combination with ORMOCER® layers, they provide an ideal barrier against the diffusion of water vapour and oxygen to the encapsulated components. It was possible to apply zinc-tin oxide or aluminum oxide layers by adapting the process to the specific mechanical and surface properties of ETFE films. This enabled a large-area roll-to-roll process with reactive dual magnetron sputtering of the ETFE films under vacuum.

The next challenge after the development of suitable coating materials was the functionalization of the fluoropolymer films with a multi-layer coating system able to cope with the special mechanical properties of ETFE and other fluoropolymers. Many fluoropolymers, like ETFE, have a low elastic modulus which will lead to higher elongation when exposed to the mechanical strain in a roll-to-roll process. This may result in damage to pre-applied layers. That risk of damage is severely increased by the required process temperatures of over 100°C. At the Fraunhofer Institute for Process Engineering and Packaging IVV, the experts in handling of all kinds of packaging materials managed the challenge to adapt the existing roll-to-roll ORMOCER® coating process for fluoropolymer films to withstand both the involved mechanical stress and the required drying temperature of 120 °C.

In their joint project, the three Fraunhofer Institutes accomplished to develop a robust manufacturing process in pilot scale to apply barrier coatings of consistent quality to fluoropolymer films as substrate. The water vapour permeability was 0.002 g/(m2d) at 38°C with 90% humidity and so meets the protection demands for the long-term use and consistent performance of sensitive electronic components.

Flexible electronic devices like solar cells require a high light transmission of the encapsulation film additionally to the good permeation barrier properties. In the »flex25« project, anti-reflection properties were added to the wheather-side surface of the fluoropolymer webs by using a large-area plasma-based nanostructuring process. The research team of the Fraunhofer FEP treated the fluoropolymer surface with pure oxygen plasma to create nanostructures  that provide a gradual change in the refractive index – similar to the moth-eye effect. A single-side antireflection treatment affords maximum transmission values of over 95% for ETFE films. The transmission of the visible wavelength of light could theoretically be increased to 98% by a both side antireflection treatment.

The next step after the successful completion of the project is bringing the gained knowledge to application. Some issues still need further attention, such as the long-term weathering stability, heat and moisture resistance. Also – a good permeation barrier film is not yet a device – successful demonstration of the deposition of electronically active functional stacks on fluoropolymer webs is the next milestone towards the direct integration of the new film solution in building envelopes.

All this will be part of follow-up projects. In addition to that further research is required regarding the interaction between building components, adhesives and functional films to take them one step ahead towards innovative façades that shine brightly, generate power, or shade in sunshine. But the day will come when we see the Munich Allianz-Arena – or the Beijing Water Cube or Astana Khan Shatyr Entertainment Center – in a brand new light.

The development took place within the public funded research project »flex25« (grant agreement 03V0224 given under the program „Validation of the innovation potential of public research“) of the Federal Ministry of Education and Research BMBF. 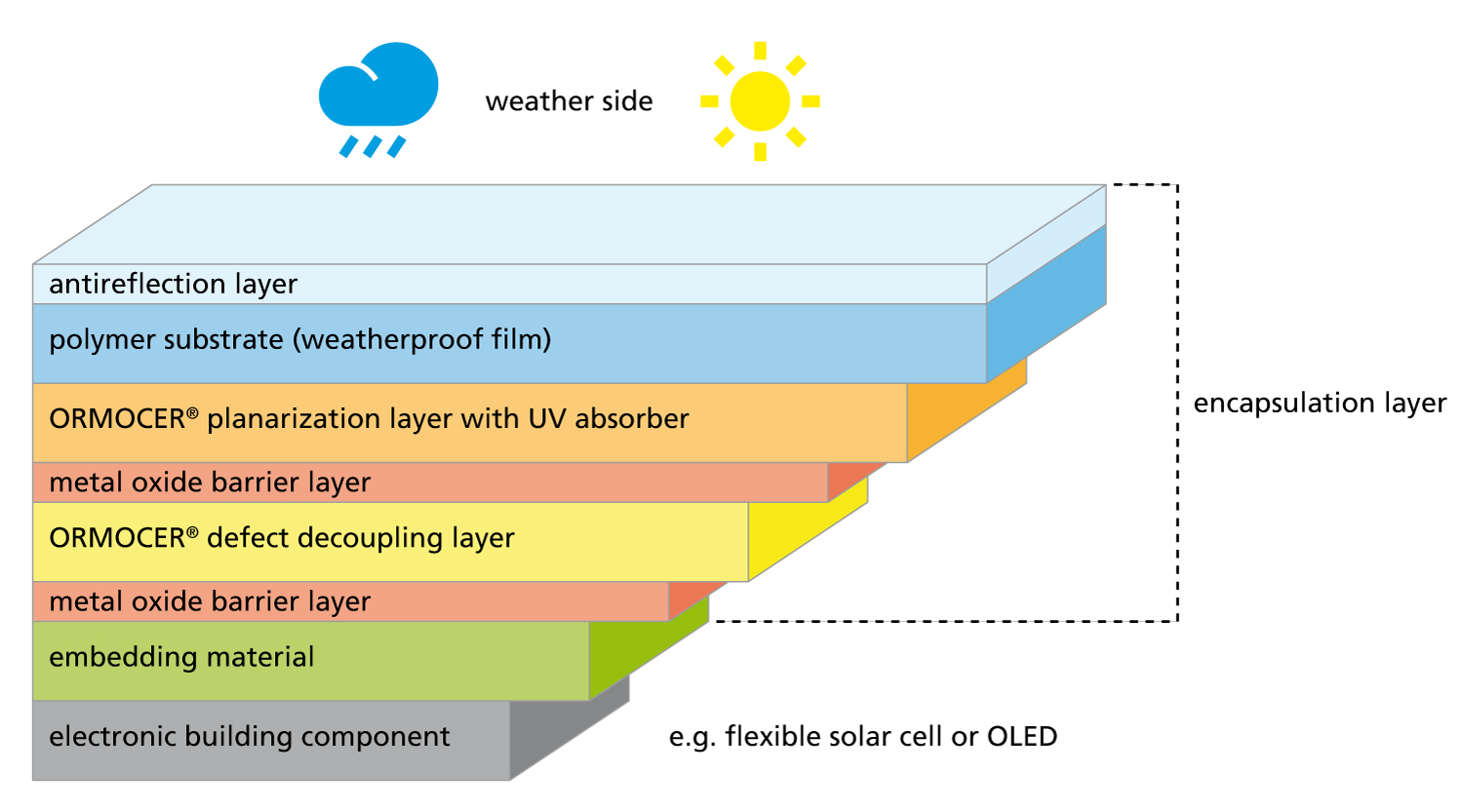